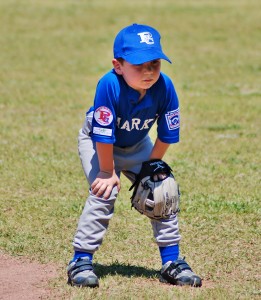 One of the greatest lessons I ever learned was taught to me by my son Christian when he was only five years old.

Christian, who is now eight years old, was playing five year old t-ball. It was a beautiful day, and all of the kids where having a great time. In the third inning, it was Christian’s turn to play pitcher. Anyone who has had a child on a t-ball team knows that the position of pitcher in t-ball is synonymous with “target.”

Christian stood less than 20 feet in front a kid with a bat and stationary ball on a tee. He was excited, and I was petrified. All I could think of was a line drive hitting him square in the face. Before he took the field, I told him to keep his eye on the ball; no matter what happened, he had to keep his eye on the ball. I patted him on the head, said a prayer and wished him luck.

Finally, the inning was over, and he proudly ran off the field with a huge smile on his face. He thought he did great, and I was ready to have a firm father son talk about listening to instructions. As he sat on the bench, I asked him what he was doing out there. Our conversation went like this:

Me: Christian I am very sorry I kept yelling out to you to keep your eye on the ball, but I was afraid you would get hit.

Me: Actually it’s not OK. I reminded you every ten seconds, but you didn’t keep your eye on the ball.

Christian: I did dad.

Me: Son, you had one of your eyes closed the entire time.

Christian: I had to keep that eye closed because it wouldn’t stop looking at the playground.

I was speechless and gave him a big hug.

My son’s innocent and simple solution to what must have been a huge distraction for a five-year-old was perfect. He didn’t run off the field, complain or seek professional help. He simply closed the eye that could see the playground. What an impact his simple solution had on me.

A day hasn’t passed since then that I haven’t closed an eye to a distraction. There are so many things that can distract us from our goals in today’s hectic world. When I realize I’m doing something unproductive or counterproductive, I actually close one eye and refocus on my task, which leaves me with a big smile and a heart full of gratitude.

Is there anything that you need to close and eye to? If so, there is a simple solution.